A man of
Great Vision

Keshav Shankar Pillai, popularly known as SHANKAR, was India’s most celebrated cartoonist before and after India’s Independence.

Shankar was born on July 31, 1902, in Kayamkulam, in Kerala. After graduating from the Maharajah’s College of Science, Trivandrum, in 1927, he went to Bombay to join the Law College but soon quit studies and started working. Even as a student in Bombay, Shankar took to cartooning as a hobby, and his drawings on political personalities and the national events attracted the attention of the newspapers and of the public. He joined ‘The Hindustan Times’ in 1932 and continued as its staff cartoonist till 1946. His contribution to the paper during the formative years of Indian Independence was a memorable phase in Indian journalism.

Shankar began publishing the ‘Shankar’s Weekly’ in 1948. It abounded in healthy, sparkling humour. The high and mighty came into focus in Shankar's cartoons. Shankar closed down the Weekly in August 1975 and took to the pen. He concentrated on developing the different facets of the Children’s Book Trust (CBT), which he had founded in 1957.

Pioneer publishers of children’s books in India, CBT has set itself the laudable objective of promoting the production of well-written, well-illustrated and well-designed books for children at prices within the reach of the average Indian child.

CBT publications include an illustrated monthly magazine in English ‘Children's World’. Shankar also set up the Association of Writers and Illustrators for Children (AWIC). 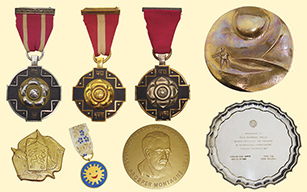 Apart from these CBT’s other projects include the International Dolls Museum, the Dolls Designing and Production Centre, the Dr. B.C. Roy Memorial Children’s Reading Room and Library, Shankar’s Academy of Art, Shankar’s Centre For Children, and the Indraprastha Press.

Perhaps one of the most decorated men in India, Shankar was the recipient of several awards: Padma Shri (1956); Padma Bhushan (1966); Padma Vibhushan (1976); the Order of Smile (1977), an honour from a committee of Polish children; a Citation and a pin from the Hamilton branch of the United Nations Association in Canada for his dedicated service to the children of the world (1979); a Commemorative Medal from the Hungarian Institute of Cultural Relations in appreciation of his activities and contribution to children (1980); Order de Saint Fortunat from the Federal Republic of Germany in recognition of his dedication to children’s cause; a gold medal from the Government of Czechoslovakia for the promotion of Indo-Czech friendship; a silver plaque from the Arab Children presented by the Arab Cultural Centre, New Delhi for promotion of International Understanding through Children’s Art (1984); and the D. Lit (honoris causa) by the University of Delhi in 1984.